We just finished with our church Christmas Celebration, it was tiring, but it was worth it. We had wonderful team working together to serve God in this event. Great job guys and gals! I would like to share one challenge we encounter in the visual presentation team. The challenge actually starts last December, but I just write about it now. Last December, we are asked to utilize projector for helping audience to virtualize settings in the drama, since we do not have any physical stage decorations. So far so good, we just create the contents and display them using appropriate program. Ideally, we will have something like the following.

Ideal Projector Placement (credit to Martin for the illustration)

However, we could not implement the ideal projector placement. We have problem hanging the projector, as we do not have skill to build custom mounting bracket that could be hang on the curtain's rod (i.e. we rent the building, so we could not mount anything on the wall). Ehm...trouble, fortunately, I found an idea that we could use. If I could put the projector on the side and adjust the perspective, I could achieve larger projection size without obstructing drama/choir people and I do not have to hang the projector at the top center. In short, the program development is started right away and the first version is used last December, unfortunately, with a lot of bugs :(

Implemented Projector Placement (credit to Martin for the illustration)

In the initial release, the ideal perspective could not be achieved, because I only consider translation, scaling, and skewing. I miss rotation. Hence, on last December event, half of the projection image looks ok, the other half looks stretched :( Moreover, there are heavy memory leak on the program at that time as well, so video playing is pretty bad. 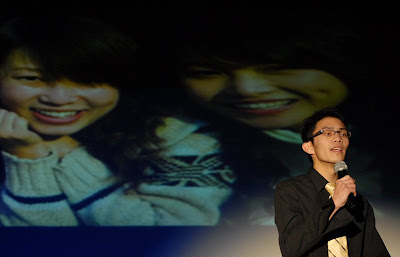 Image on the left side is ok, but it is stretched on the right side

Time passed, the program is still used on Easter, but this time we avoid placing projector at extreme angle to avoid rotation problem I mentioned above. We are ok this time since the building we rent has enough space that allow us to do rear projection, and we also put another projector on the balcony. In total, we used three projectors: two projectors for rear projection to form 2048x768 resolution, and one projector on the balcony, mainly used for subtitle and video (i.e. projector calibration is disabled on this projector). This year, we are renting the same building as last year. Ehm...I am pretty scared when hearing about this. I suggest to the stage coordinator (ko Hendri) to find a way to mount the projector on top at the center of the stage.

In the mean time, I try to go through my program's code to perform various improvements, I also added rotation as one of the variable when adjusting the perspective. I fix most of memory leak, but I am sure there are still some that still exist. I do not have enough time to dig into this. However, we are able to handle video playing at 1024x768 without any problems.

So I notify ko Hendry and do demo to show that the program could be used again this time. He agreed and then we proceed with it. We do however need to rent a projector with 4000 ANSI Lumens, since our projector could not handle it (ie. 2500 ANSI Lumes). 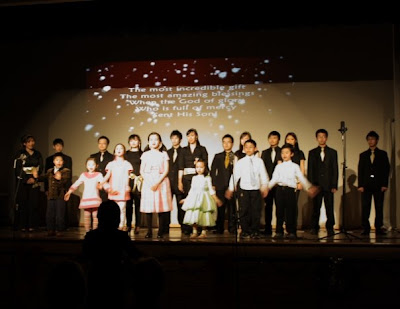 That's it, I forgot to mention that everything is done in Flash, which could easily top up CPU usage. Machine on the left (gray machine) is used as controller for both audio and video. Machine on the right is running the projector calibration program only. It is being controlled via socket by the gray machine. I used my Android G1 to remote control the audio and WiiMote to remote control the projector calibration program. It is possible to control everything just with mouse and keyboard, but I am more comfortable with this setup. For the next version, I am planning to bring everthing to OPENGL, GPU could give better horse power especially when we want to play HD video.